Chart of the week: on Brexit risks 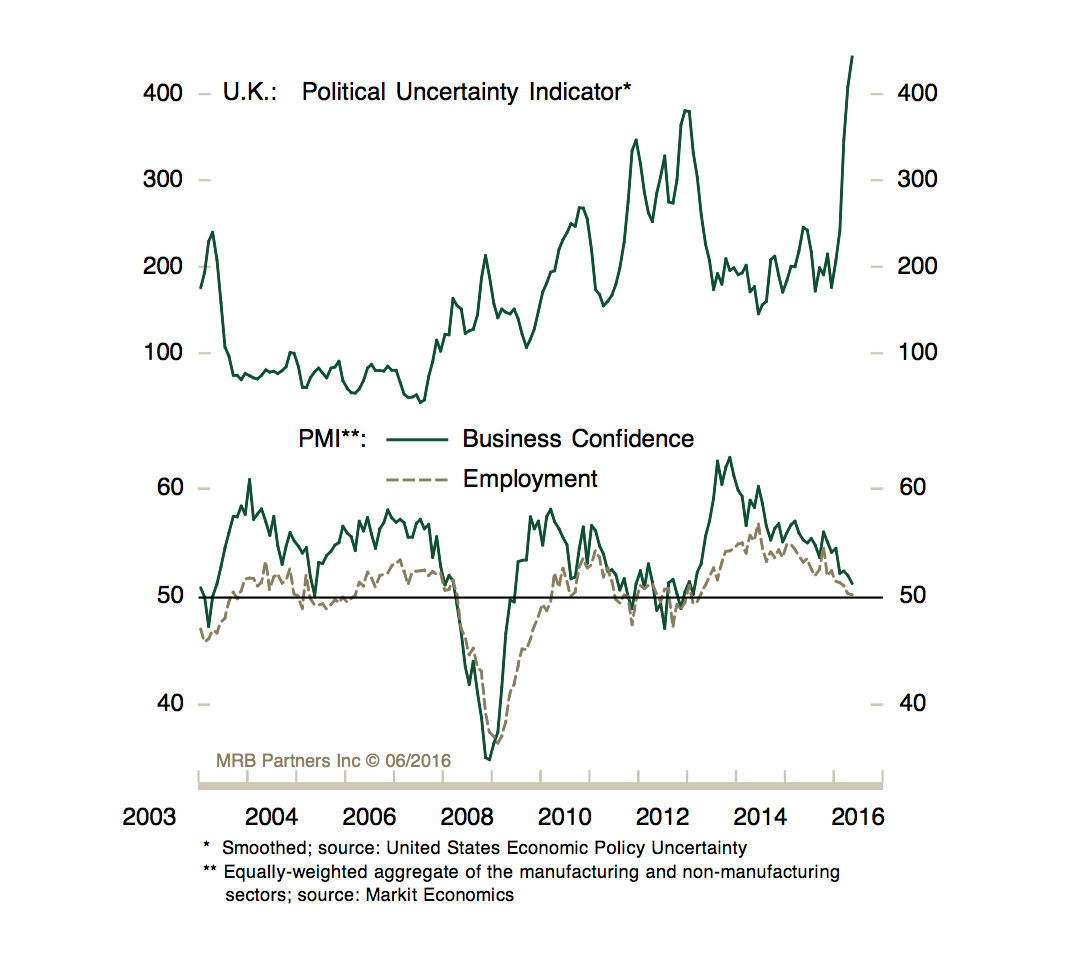 A major threat for risk assets looms this week. It is in the hands of U.K. voters and has the potential to be very disruptive. The probability of “remain” still has the upper-hand in both polls and betting markets, but investors are nervous in the face of the unknown implications of a U.K. exit from the European Union (EU). While MRB has a moderately pro-cyclical tilt in our asset allocation, we are short-term cautious, and would be quick to significantly de-risk if the U.K. votes to leave the EU.

If an exit does not occur, then we expect the post-February rebound in risk assets to resume and investors will likely soon return to pondering whether a Fed rate hike is back on the table. Underlying economic conditions are decent in the major economies, particularly the U.S. and Europe, but investor sentiment is fragile and prone to the negative narrative in a low-growth, deleveraging world.

If an exit does occur, we would reduce our risk exposure meaningfully, and focus on defensive markets and the U.S. dollar. A jolt such as fears of a U.K. recession, with significant knock-on effects on the continent, would trigger a meaningful risk-off phase and warrant a more defensive investment posture than our current moderately pro-growth stance. Even if the ultimate economic fallout was modest and temporary, investors are in a “sell first and wait-and-see”, not a “hold on and wait-and-see” mindset.

There will be much reduced odds of better U.S. and global growth if the U.K. votes to exit. Certainly, investors would react as if that were the case and the danger is that it could lead to a self-fulfilling outcome. New economic and political uncertainties in the U.K. and euro area, and yet another serious challenge to the future of the euro currency, all at a time of low nominal growth and policymakers running low on bullets, is an ugly combination. Unlike in 2012, there will be no grand announcement from the BoE or ECB (or even the Fed) that might calm the waters. Perhaps the business sector will not retrench much nor for long, but there will be considerable uncertainty in the months that follow, and global investors have been generally risk averse this decade.

The U.S. economy and markets would be impacted if the U.K. and euro area economies slowed meaningfully, but less so than countries and markets that are levered to better global growth. The euro area crisis in 2012 triggered harsh market reactions around the globe, and slowed the U.S., but not sufficiently to trigger a recession (although it prolonged the Fed’s QE program). The U.S. dollar is likely to be seen as a safe haven.

MRB – The Macro Research Board (www.mrbpartners.com) is a partner-owned independent research firm, recognized as one of the world’s leading providers of well-researched and actionable theme-based macro strategy and investment ideas.