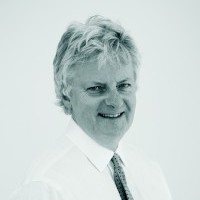 One important lesson I have learnt from studying the investment methods of John Templeton is how valuable it is to be able to keep track of long term trends that change steadily and slowly over periods of years. It is all too easy to lose sight of these long cycles amidst the noise and excitement of short term market volatility. Yet getting the right side of these longer term trends is a necessary condition for long term outperformance and personal wealth creation.

So here, with thanks to strategist Michael Hartnett of Bank of America Merrill Lynch, and his excellent publication The Longest Pictures, are five important trends that in my view bear watching closely. The key is not to try and predict in advance when they are finally going to turn – that is way too difficult – but instead to make sure that you are aware when they finally show convincing evidence of turning. This can take years to come about – typically much longer than markets expect – but it is vital to be the right side of them when they do finally occur.

This is the grand-daddy of all long term trends. A secular decline in interest rates has been playing out for more than 30 years. All attempts to call the bottom in the interest rate cycle have so far proved premature, to the point that government bonds have outperformed equities over a three-decade period for the first time in history. The interest rate cycle will change in due course – but wait for convincing evidence before you reshape your portfolios that way. It could easily take a lot longer than consensus opinion expects.

Scores of academic studies show that value stocks outperform growth stocks over the longer term, but you can wait a long time for that trend to reassert itself. Investors have been living through one of the longest such periods in living memory, as growth stocks have been making all the running for the last seven years. This is linked to the power of the “three Ds”, global forces that are shaping today’s investment environment  (debt, demographics and deflation). 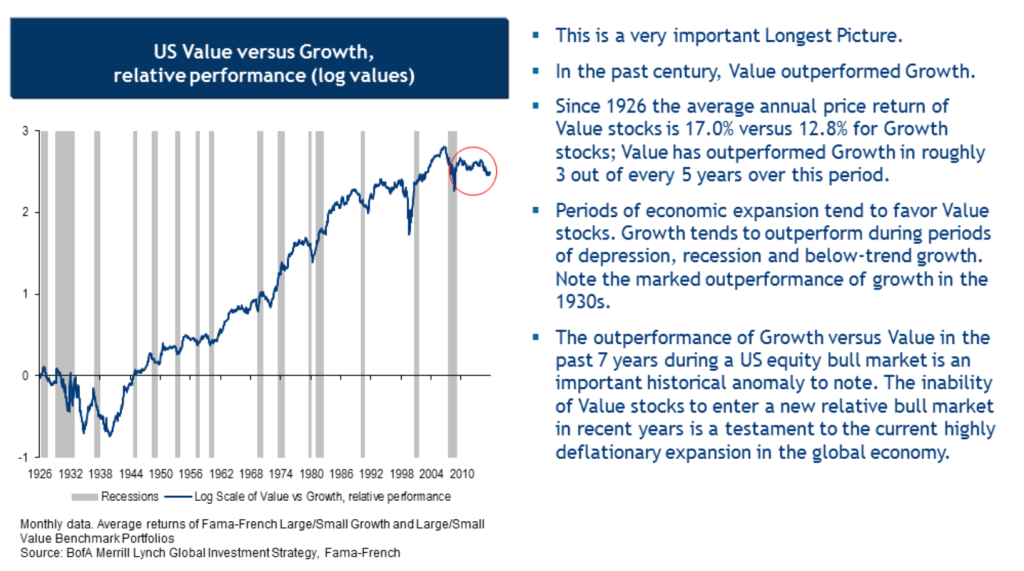 Bank shares have been in relative decline for years, a trend that was accentuated in the wake of the global financial crisis. As Hartnett notes, the performance of bank shares has a lot in common with the path of interest rates, underlining the point that banks do better in a climate of rising interest rates. Just as important is the shape of the yield curve – the relationship between short and long term interest rates. As banks borrow short, and lend long, they profit most the greater the gap between long term and short term rates (the higher the better). In recent years the yield curve has been flattening.

If you want an explanation for the rise of populist and extremist political parties around the world, look no further than this simple chart. The evidence of inequality is more nuanced than some commentators assume. But what cannot be denied is that far more wealth has accumulated to those who hold or manage financial assets than it has to those who work in traditional industries. At some stage these political shifts will lead to corrective measures – maybe higher taxes on companies and the wealthy. A definite headwind after the policy-assisted financial gains of the last seven years.

As everyone knows there have been a number of violent swings in the commodity cycle over the past 50 years.  All the talk of a commodity super-cycle in the run-up to 2007 looks absurd in retrospect. The long term rate of return on commodities has been zero, but with significant dispersions around the trend. There have been some tentative signs recently that the sharp decline in commodity prices witnessed since the peak in 2011 may now be turning once more, making this a particularly important trend to follow.

So which of these five trends is going to turn first? Commodities are the one to watch most closely, as they appear to have at least stabilised after the dramatic fall in oil prices of the last two years. Those with a Biblical interest will take comfort in the existence of a seven-year cycle of feast and famine. It is the interest rate cycle that holds the key to most longer term trends, which is why if the Federal Reserve does succeed in raising and holding interest rates for any length of time, it could mark a trigger for the first fundamental change in the market backcloth for some time.

Notebook; lessons of the Leave vote

Notebook: the yo-yo on rates continues

Notebook: Terry Smith, what next?